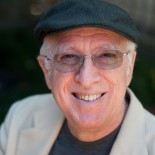 we can reconcile ourselves with the mysterious truth that spirit is the living body seen from within, and the body the outer manifestation of the living spirit—the two being really one…

We admire the achievements of all the athletes striving to merge body and spirit in the pursuit of the sublime.  We celebrate the exuberant victories of the sprinter, Usain Bolt, if not perhaps his hubristic grandiosity in declaring himself “a living legend.”  For now he stands alone, but, as the equally talented swimmer, Michael Phelps, demonstrated, records will always be surpassed.  Phelps’ record of 22 medals eclipsed the 48 year-old record of 18 medals held by the Soviet-era gymnast, Larisa Latynina.

Ms. Latynina was there to observe, and also to congratulate, Phelps, as he surpassed her record

with a victory in the 4×200 freestyle relay. The 77-year old Olympic champion was both humble and humorous in acknowledging his feat, noting “it was time for a man to be able to do what a woman had done long ago.”

Jung had warned that to counter the power of the State or nation, “the free society needs a bond of an affective nature, a principle like caritas, the Christian love of your neighbor.”  Ms. Latynina echoed this wisdom by hoping, “That [Phelps] doesn’t look back into the past at his records, but remains a normal, good, kind person.  Because that’s the important thing in life.”

At the conclusion of the Olympics there were the inevitable comparisons of the number of medals won by different countries.  But, while the Olympics began with athletes marching into the stadium by country, they ended with the competitors marching as individuals independent of their nation-state.  As the NBC commentator pointed out, “They are global citizens at least on this day.”

Jung said, “Happiness and contentment, equability of soul and meaningfulness of life—these can be experienced only by the individual and not by the State.”  This is the true lesson of the Olympics for us all.  We honor and respect and are thrilled by the amazing physical feats of these individuals.  And our spirits are lifted as we join with them in their humanity.