“The War on Women” as Enantiodromia

In my last blog I discussed Jung’s concept of enantiodromia where a repressed force or idea emerges when its opposite is extreme.  I discussed this and its related concept of “the tension of opposites” in a political context.  One of the seemingly disturbing and inexplicable issues we are currently facing in the political arena is the so-called “War on Women” being waged by the Republican Party.  It is most apparent in their draconian stance and legislative actions in states such as Virginia on abortion. The Republican position now is that all abortions are to be prohibited after 20 weeks with no exceptions for rape or incest, and women are often forced to undergo unnecessary and sometimes invasive forms of ultrasound at their own expense.  However, Republicans have also blocked legislation (the Lilly Ledbetter Fair Pay act) mandating equal pay for women performing the same work as men.

Why would a major party engage is such actions when the political costs are so high?  It only makes sense psychologically as Jean Shinoda Bolen makes clear in her book, Ring of Power (Nicolas-Hays, 1999).  While Bolen’s book is ostensibly about a “feminist perspective” on Wagner’s epic, The Ring Cycle, it is relevant today.  In Wagner’s story the German thunder god, Wotan, lusts after the “ring of power” forged by the dwarf, Alberich, from the Rheingold.  This leads to a series of tragic events resulting, of course, in his and the gods demise. 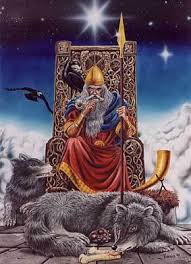 The protagonist in the story is his daughter, the Valkyrie, Brunnhilde, who brings the feminine force of love and compassion (the enantiodromia) to confront Wotan’s obsession with power at any cost.

How is this related to the War on Women?  Bolen answers, “For several thousands of years, since Indo-European warrior tribes with sky gods overcame goddess-worshipping peaceful people in old Europe, Western patriarchy has actively kept feminine values and authority, goddesses and women, ‘in their place,’ which is to say that whatever is considered feminine has been dominated, denigrated, denied, and actively held down “ (p. 215).

The rants of commentators such as Rush Limbaugh, who refers to activist women as “femiNazis,” fit this pattern of behavior as does the position of the Republican Party as stated in their platform and by their candidates.  They are the new Wotan, as in White, Old, Terrified, Angry, Nihilistic males.

Bolen also notes, “In contemporary family life and commentaries upon society, it is ‘the daughter’ who brings to light abuse of power in relationships.”  Sandra Fluke is one such daughter; Elizabeth Warren is another.  If other women join them, then perhaps the new Wotans can be vanquished before precipitating another destructive Gotterdammerung.