“We must separate from God before we can reunite with God.”

“Each generation has to make its own discoveries of Spirit for itself.”

Once upon at time, when I was in elementary school, I attended Hebrew school. One of the first Biblical stories I remember hearing concerned Abraham, the patriarch of Judaism. According to the fable, Abraham’s father was an idol maker in the city of Ur of the 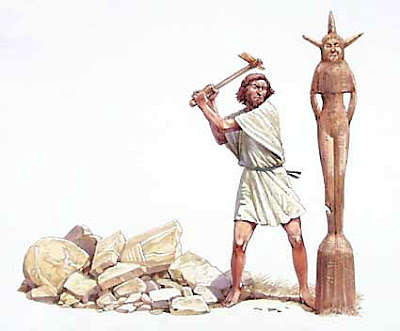 Chaldeans, in the Kingdom of Babylonia. Abraham heard the voice of God, smashed the idols that were “graven images” to a false god, and left Ur for the land of Canaan. Only recently, have I learned that the story is not in the Bible. There, we are only told that, “The Lord said to Abram, ‘Go forth from your native land and from your father’s house to the land that I will show you’ (Genesis 12:1).”

At age 73, I now have to ask myself if that apocryphal story is, as Robert Johnson maintains, one that should be understood “not literally but symbolically” (Balancing Heaven and Earth, p. 131)? The Bible is replete with stories of departures, from the fall of Adam and Eve in the Garden of Eden to the exodus of Moses and the Jewish people from Egypt. The story of Abraham differs, however, in two important ways: First, Abraham destroys the idols of his father or, in psychological terms, the influence of his father, and second, here he leaves an old god of the Babylonians and discovers a new Hebrew God, the God of the Old Testament. Is this the true, symbolic meaning of Abraham for us? Is it rediscovering, as Johnson suggests, the old God of our ancestors, or is it finding a new, more personal God, perhaps a “religious agnosticism,” as James Hollis (personal communication) suggests?

As both Johnson and Hollis would agree, the answer has to come from the unconscious where the true Jungian spiritual Self resides.  Dreams provide a major way in which the unconscious communicates. On my recent trip to California, I had the following dream:

I was in a nightclub where I met a young couple dressed in blue clothes. We left the club together and walked out into the street. There we saw a large multi-story scaffold next to a red brick façade of a church. It was the only part remaining of the church. As I looked up at it, I caught a brief glimpse of a mysterious man staring at me and at the scaffold. Then I heard a loud crack and saw that the façade was falling toward me.  I yelled and the young couple ran out of the path, but I was immobilized as the structure fell in my direction. The façade of the church shattered, as it impacted the street and pieces flew in my direction. The last piece of rubble from the very top of the façade bounced toward me and landed just at my feet. I looked up, and now saw the mysterious man at the window more clearly. He looked like a circus impresario, or a ringmaster, with a black top hat, waxed mustache, and gleaming black eyes set in what seemed like a nearly circular face, with golden-hued skin. It was clear to me that he had caused the façade to fall.

The question for me was, what did the dream mean? And what does it have to do with Abraham’s story? As a student of Jung’s, with some expertise in dream analysis, the dream seemed to have a lot in common with Abraham. The church façade was the last remnant of a religious structure, not unlike the idols of Abraham’s father. And its destruction, like Abraham’s smashing of the idols, is not a blasphemy, but a symbol of the need to find a renewed spirituality. The impresario, an archetypal manifestation of the Self, has both a circular face and, and as a ringmaster, supervises the typical “three-ring circus.” These are mandalas that for Jung symbolize perfection, and three is just a step away from the Jungian perfection of the fourth, or what he called the quaternity, that represent the wholeness of the Self, our center of spirituality. The young couple in blue also represent spiritual renewal, as blue is the color of spirituality and youth is renewal.

The message of the dream seemed clear to me.  I, and perhaps others, need to find a new spirituality. Coming just a few days after my experience in the Muir Woods (see the recent blog, “A Modern Path to Spirituality”), it seemed to confirm that I was on the path to building a new spirituality—a rebirth at age 73! My task was not to rebuild the church, but to find my own Canaan. I found it in the Muir Woods. I’ve found it in The Valley of the Gods; in Arches National Park; and in my walks around the peaceful Long Island harbor near my home, filled with ducks, geese, swans, and sailing boats. So, where can you find your spiritual self?  As the poet said:

Failing to fetch me at first keep encouraged,

Missing me one place search another,

I stop somewhere waiting for you.